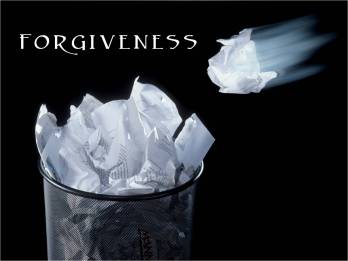 Matthew 18:27 tells us, “The servant’s master took pity on him, canceled the debt and let him go.”

Forgiveness is actually canceling a debt. It is as if someone owes you one thousand dollars, and he or she cannot pay you back; you forgive the debt, never expecting to receive the money back.

The amount owed to you is no longer owed or expected.  You give up your right to seek the repayment of that debt. Forgiveness is bankruptcy; once filed, the creditor may not retrieve the debt, and it is wiped out. We need to see the cancellation of the debt as a write-off, and not some form of embezzlement. When we forgive, we forget; that is, we are no longer to even have the desire for restitution, pay back, or punishment.

There is a man, at a church where I was once on staff, who I admire greatly for exhibiting forgiveness in an instance that I do not think I could ever have done it; yet, with Christ, I should be able to, because all things are possible with Christ. His wife was murdered, indiscriminately, by a drive-by shooter in the Pasadena area a few years ago; she died in his arms. He realized that for him to go on with his life and faith, he needed to forgive that person. And, he did. Now, he did not tell the police to let the shooter go; forgiveness is not necessarily a release of the obligation, especially when a crime is committed. Rather, we, as Christians, are released from our personal desire for retribution. This form of forgiveness even prevents us from those “polite” sly remarks and glances; our revenge is repudiated…divorced from our desire to get even.

Forgiveness is so rare in our society. For it to become a powerful witnessing tool, it must be complete.

Forgiveness does not make light of the wrong, nor should it give a license to others to take advantage of us, but, they may. Yet, it is well worth it! Out of the completeness of forgiveness will come the forgetting. Then, out of the forgetting, will come the healing. The healing we get from forgiveness will close the wounds we receive; it will allow us to go on with life. It will prevent our sufferings and setbacks from becoming our identity and obsession. For, without forgiveness, we give in to the bitterness that will consume and take us over, that it may give us a purpose for existing, but not for living. If we just try to forget, then agonize over it, we will get nowhere; but, through the process of surrender (Galatians 2:20-21) will come the forgetting. Forgetting is a process, and we can not expect it to come right away.

We must be patient, let the process unfold, and embrace the forgiveness that Christ has given us. That man, who forgave his wife’s killer, took many agonizing months to do so. But, in the end, he and his remaining family were able to get on with their lives, and honor his wife’s memory by living life. Had he remained in bitterness, not only would his kids have become dysfunctional, but a total breakdown of that family would have occurred, and his wife’s memory would have been framed in bitterness, and not life! Forgiveness has to be complete; if not, it will not work, and you will not make it!